Those of us participating in this year’s Nordic Day golf at Silves were privileged to have enjoyed another fantastic, SICG experience. The tremendous organisation of our Scandinavian members ensured a day to remember for the 67 players. Naturally, everyone was welcomed at the 1st tee with not only friendly Finnish and Swedish greetings, but also the offer of traditional spirits. Similarly, at the 10th, yet more Nordic hospitality was available, with Nordic delicacies, accompanied by a choice of refreshing liquids. Apparently, fired up with (let’s just say, ‘enthusiasm’) the efforts to land golf balls nearest to the line on the 10th fairway, were inspired by the liquids, albeit the results of many efforts being more than slightly ‘off-line’ ..! Nevertheless, well done to Agneta Torgardh, and Brian Langham for placing drives closest to the line, and claiming the respective Ladies and Gents awards!

After golf, no fewer than 68 members and guests enjoyed a great afternoon at Restaurante Recanto dos Mouros, in Silves. A few golfers were unable to attend, but our guests swelled the number to 68, in total! Bedecked in Nordic blue, white, and yellow, the restaurant was a terrific setting for the occasion which was thoroughly enjoyed by all. Sumptuous food, and lashings of various beverages, contributed to the friendly, carnival-type, atmosphere. Following the meal, tension mounted as the prize giving ceremony beckoned; and, in reverse order, results were as follows: 5th - Per-Lars Tonstad/Jan Daapan (44); 4th – Asa Hedman/Thomas Hornfeldt (44); 3rd – Ove Flenhagen/Steve Etherington (45); 2nd – Janice & Brian Langham (47); 1st – Terry & Tom Brady (48). Congratulations to all on the awards’ podium, and especially to the Nordic Day, 2022 winners: Terry and Tom!

A lottery was staged immediately after the awards ceremony, with lots, and lots, and lots of prizes on offer, it seemed that everyone was a winner, including the charity that benefited from the proceeds. Certainly, due to the privilege of participating in such a memorable SICG event, everyone whether receiving prizes or not, was indeed a winner. As a result, we are indebted to our Nordic members for their tremendous input in providing such a day. It is my pleasure, therefore, on behalf of all SICG members to convey both congratulations and sincere thanks to all involved in staging the event: Kiltos! & Tack! 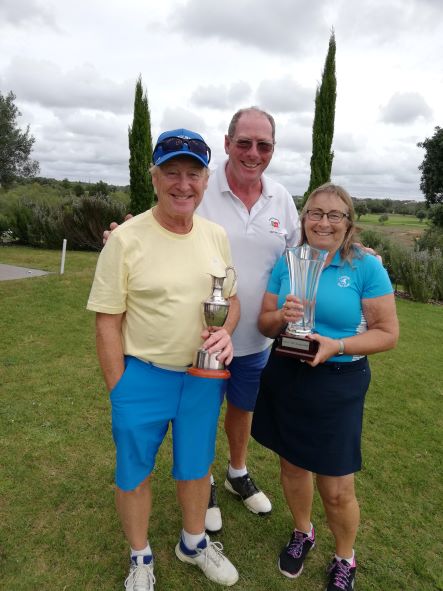 On October the 12th and 14th the Club Championship was contested. A total of 56 players took part.

Men Petter Barth with a total of 155 strokes

They are also part of this years successful Interleague Team

Petter gave us a short impression of the close contest.

The Club Championship this year, like every year, was very exciting.
On the Friday round it was swaying back and forth for a while when both Paulo and John played very well to catch up to my score.
After my drive of the day on the 17th hole my driver shaft broke, but I managed to make a par on the last 2 holes to stay ahead.
Looking forward to trying to defend next year. 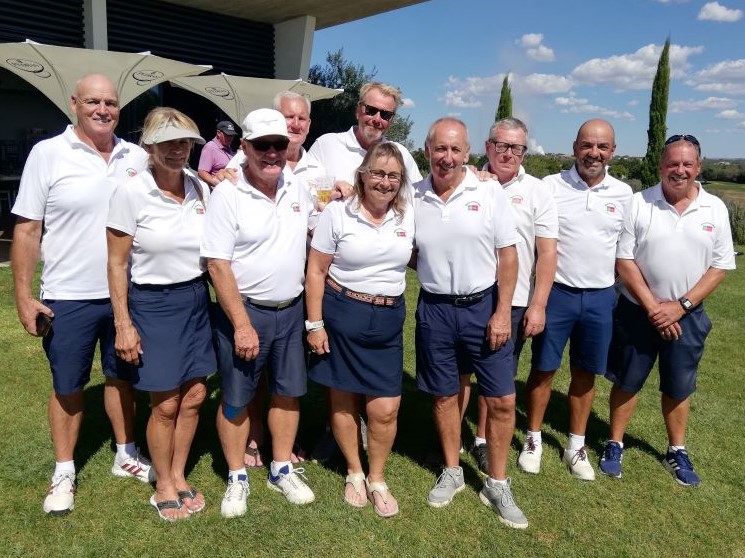 Congratulations to all Interleague players who represented the club this year, following SICG's promotion to Division 1.  Achieving promotion is of course a great achievement in itself, but having managed successive promotions last year and also now in 2022 signifies a truly a fantastic performance. Today's team (pictured here) battled against formidable opponents, to draw against the newly crowned champions, Vilamoura, and secure second place in the division. As a result, the runners-up spot secures promotion to the top division. The consistently good performances over the entire season reflect extremely well on every single player who played for the team. On behalf of the club, it is my pleasure and privilege to convey sincere thanks to everyone involved in what has been a tremendous team effort to achieve such success.

While SICG as a club has backed the Interleague team, the influence of Team Captain, Lars, cannot be understated. A calm, respectful approach, along with a determined will to win, has characterised his captaincy. By responding so positively to his leadership, the success achieved by the players representing SICG may be celebrated by every member of our club. Similarly, it is entirely appropriate to acknowledge the overall input of this year’s club Captain, Brendan, whose ongoing support, including the appointment of Lars as team captain, has also contributed significantly to this year’s Interleague success.

Finally, therefore, I am delighted to reiterate on your behalf our sincere congratulations to the entire Interleague squad on the having secured back-to-back promotions, a truly fantastic achievement. Well done, all! 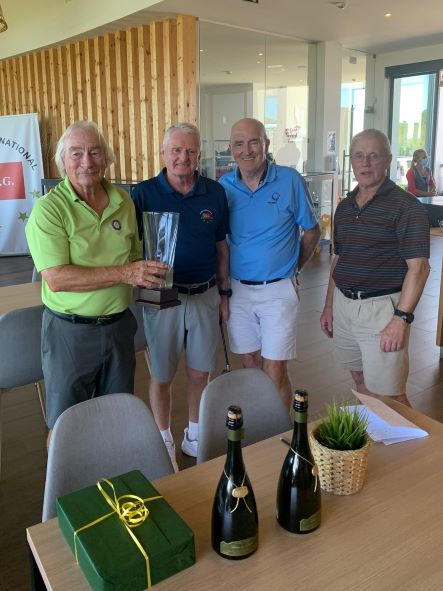 The competition format was Pair Better Ball Stableford and was contested by 48 Players.  It was followed by a well organized luncheon and the prize giving by our President Tom Callan and Don Simpson Junior.

The winners were: Gerry Murphy and Volker Lankenau

Runner Up: Don and Ruth Simpson

Closest to the Pin: 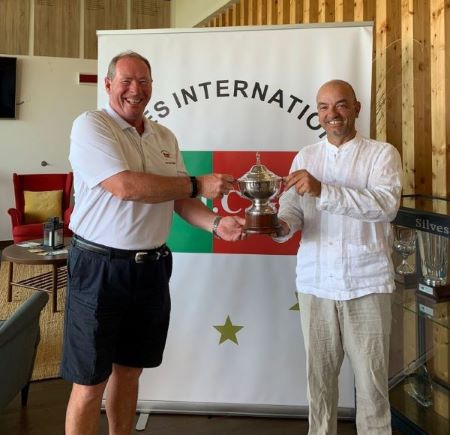 On the morning of Friday, the 9th of September at 07.57,  the first members of SICG took their stand by the club banners for their photo call before moving on to the first tee box.

The first to drive off into the early morning sunshine were three ladies, Hazel Padgett, Katrina Iho and Margaret Morrison. The first three drives were watched by the waiting queue  of golfers and they set the standard for the day.
Over the following two hours, flights of four balls took off from the first tee in the continuing beautiful sunshine and the Captains Day was well and truly under way.
In just under one hour and 35 minutes,(well one hour and 32 minutes to be precise ) the first golfing group made their way onto the 9th tee box to be greeted by Yvonne Nevin and Breege O Connell where they were served with Cheese and ham rolls, Sangria, White wines, beer water and some well deserved  chocolate. There was great chat and banter a o get golfers at the half way house and food and drinks were were served up with smiles and words of encouragement for the next two hours.
Captain Brendan travelled up and down the course crossing the fairways and the rough chatting and encouraging the players.
It was late in the afternoon when the last four ball arrived at the clubhouse where Lars and Captain Brendan were standing by to receive the cards. A few thirst quenching wines and beers were consumed and then members moved off to get ready to go to the Captains Dinner that evening.
The sun continued to shine as members met at the clubhouse at Pinta at 7 pm for drinks and canapés and chat on the terrace where once again there was great banter and stories about missed putts, long drives and who had won the coveted trophy, but that was Alan Winstanley’s secret, yet to be revealed!
Dinner was called at 8pm.
As members took their places at the dinner tables, Captain Brendan welcomed everyone to the dinner and outlined the running order for the night.
President Tom Callan was called on to say grace and Tom delivered in his usual inimitable style.
After dinner and as coffee was being served, Brendan and Tom announced the winners for the day.
First and winner of the captains Trophy 2022 Paulo A. Azevedo : 41 points
Second place: David Morrison : 38 points
Third Place : Ilkka Katko : 37 points.
Nearest the pin ladies Katrina Iho
Nearest the pin men Ilkka Katko
After the winners announcements, there were some further  prizes presented to those members who had a lucky red X on their place cards and then we moved on to the table quiz with some great fun and laughter  prizes for the correct answers.
A round of applause was given to two members who received particular mention, Tom O Neill who celebrated his 80th birthday on a Tuesday and then went on to win the medal on the following Friday and also Heli Ives who was presented with a special winners shirt for her 5th medal win.
After the prize giving and announcements members took to the floor to the music of Vitor, and danced the night away until close to midnight. Just before the bewitching hour, the chariots were called and revellers made their way home ( hopefully) to a well earned rest after a long and exciting day.
Read more: Captains Cup